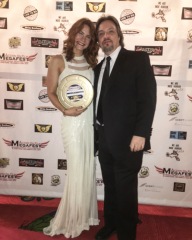 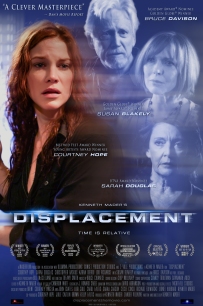 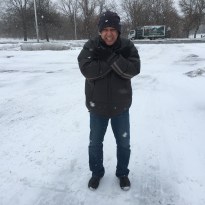 Interview with Kenneth Mader on the making of DISPLACEMENT

Danny Templegod from Dan’s Movie Report just interviewed our Writer-Director Kenneth Mader on the making of DISPLACEMENT—trials, successes, stars, and more! Check out the interview below:

Greetings valued readers of Dan’s Movie Report, today we have an epic interview from the creative mind of Kenneth Mader. Mr. Mader chats in depth about Displacement, detailing the trials and triumphs of his lengthy odyssey to complete his opus to his mom. Displacement brings to light a unique creativity as rare as lunar rock, yet as accessible as a new day over the ocean. Displacement was my top pick for the 2016 year. Mader exudes talent, class, and a work ethic, that will no doubt see his status rise over the coming years. Grab a seat, sit back, relax, adjust your watch, bend time and get displaced! Kenneth Mader shall infuse wisdom and quantum theory in your brain, and a textual lashing of inverted reality, coupled with a deep knowledge of the inner workings of independent film making… 3-2-1- GO!

DMR: How long after your mom passed did you write the script for Displacement, or was it started while she was alive?

KM: I had begun noodling with notions for the script while she was alive, but it didn’t really coalesce until she passed and I decided to incorporate what happened when she got sick, which was her desire to see the ocean one last time. Unfortunately she had cancer and it progressed so quickly that my Dad and I weren’t able to fulfill that wish, so that became essentially the heart of the story, and the issue my lead character is dealing with that drives the entire narrative. It still took about three years after that of on-and-off writing to finish the script — especially after I complicated things for myself making it a looping time travel story! Then in early 2013 I jumped off the cliff to start production.

DMR: Chat about some of the limitations of filming over a few years and having only at times some weekends to shoot around scheduling of performers and crew?

KM: Yeah shooting a film piecemeal over the course of two-plus years is extremely challenging on a number of levels, not the least of which is continuity. Little things like: imagine having to keep you hair exactly the same over that extended period of time… and you have Courtney’s hair! (she was great and had an excellent stylist who was able to match it shoot-to-shoot). There was also the fear of losing Courtney to a big movie or tv show. We actually had a couple of scares like that along the way, but thankfully everything worked out. (She didn’t land on The Bold and The Beautiful until just before our release.)

Conversely there were also some benefits to the extended shooting schedule, mainly the ability to shape and improve the film as we went along. Something we captured in one scene would instruct and change things in scenes we had yet to shoot. For example, Courtney’s level of intensity entering the hotel room after experiencing the timeslip on the beach inspired a complete rewrite of that timeslip sequence, which hadn’t been shot yet. In fact in the original script it was a completely different and smaller scene that took place at the hotel vending machines. But her performance felt like we needed a stronger motivation than what was written, and I also wanted to expand the scope a bit and show what was happening in the world around her. So in this case taking so much time to get the film in the can worked to our benefit, and I believe the benefit of the movie.

To learn more about shoot challenges, casting, future projects, and the people Ken would love to work with read the rest of the article here.

Displacement in Theatres and On Demand!

Posted by Maderfilm on May 9, 2017
Posted in: Uncategorized. 1 Comment

April 28, 2017 we had our LA Theatrical Premiere at the Laemmle Monica in Santa Monica complete with red carpet, popcorn, and Q&A.

It was great to see everyone again! Two years after filming wrapped and a year spent in the festival circuit, everyone had wonderful stories of what they had been up to… and the Besana twins are all  grown up! Check out these pics from our red carpet.

The film opens in Chicago May 12 at the historic Logan Theatre! In the Windy City? Get tickets here!

Not in the Windy City? Displacement is also available on Amazon Prime, iTunes, and Google Play, with DVD coming next month.

We started the journey to Displacement 4 years ago today.  It was a rare, rainy and cold day in the LA area, but that didn’t stop us from moving ahead.  We spent the day inside Wiznu Studio filming some of the most critical scenes of Cassie (Courtney Hope) and Dr. Miles (Sarah Douglas) in The Initiative.

We rounded out our luck in 2016 with a deal that put Displacement on the Lifetime Movie Network and in homes across the US.  We also got an international distribution deal so we can be seen all over the world, with more deals to announce very soon.

We want to thank all of our cast and crew and and partners for all their hard work and dedication and support over the last 4 years!  Thank you for making Displacement possible!

And thank you to our fans!  We can’t wait for you to see what is next. 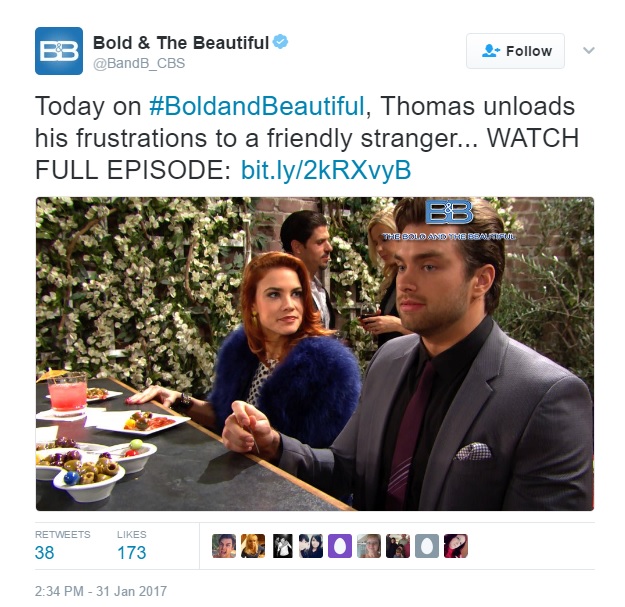 ‘DISPLACEMENT’ TO SCREEN IN THE DOWNTOWN L.A. FILM FEST

Posted by Maderfilm on September 10, 2016
Posted in: Uncategorized. Leave a comment

Posted by Maderfilm on May 30, 2016
Posted in: Uncategorized. Leave a comment

So as we prepare for a trip to Nashville and the FILM-COM Development, Financing and Distribution Market, we thought we’d give you a recap of the whirlwind that has been the last few months criss-crossing the country on our national Film Festival Tour.

Most recently we were in Dallas for the USA Film Festival, where the fest also presented a tribute to our amazing cast member Bruce Davison, and both he and our star Courtney Hope appeared on local news programs promoting the film. Scroll down to check it all out below: 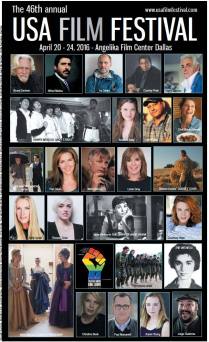 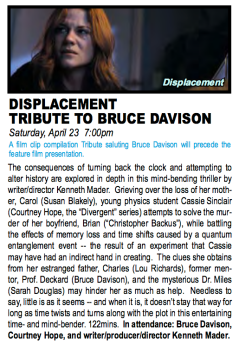 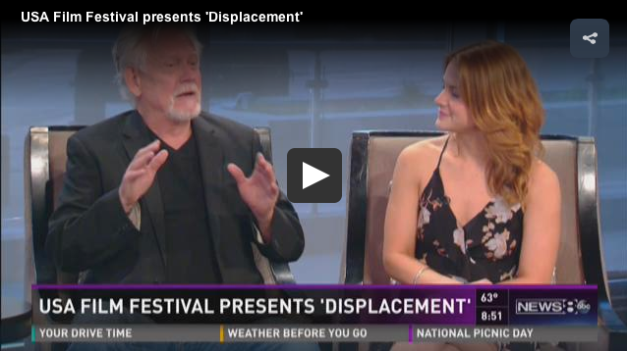 Bruce Davison and Courtney Hope stop by Daybreak to talk about ‘Displacement’ which screens Saturday at the 46th annual USA Film Festival.

Prior to that we were an Official Selection in the Phoenix Film Festival, where Mr. Mader was invited to join a Director’s panel along with an educational outreach seminar. 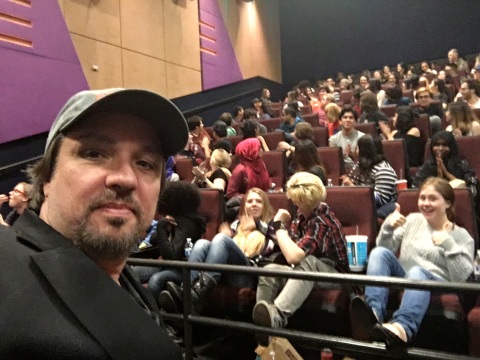 Our West Coast Premiere was February 19, 2016 (on the 3-year anniversary of the start of filming!) in the Hollywood Reel Independent Film Festival, where we won the award for Best Science Fiction Film and Best Supporting Actor for Bruce Davison, plus were nominated for their People’s Choice Audience Award! 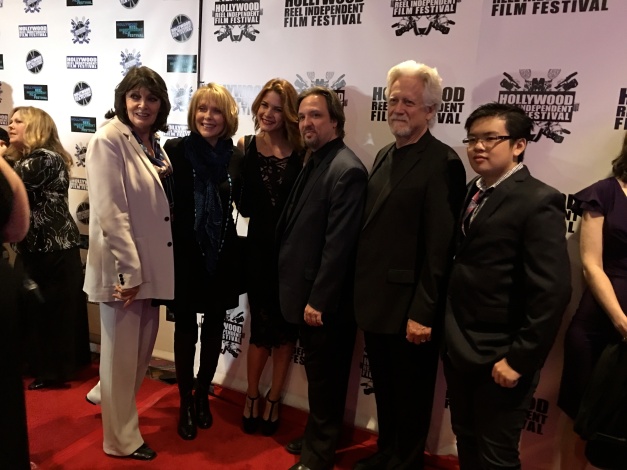 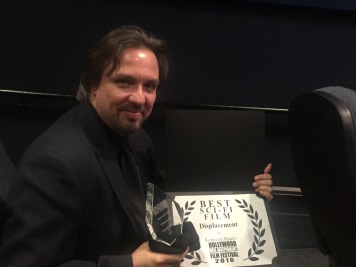 Two weeks before that we screened in the Boston Science Fiction Festival (brrrrrrrrrrrrr) where we took home their Chrononaut Time Travel Award for outstanding time travel film! 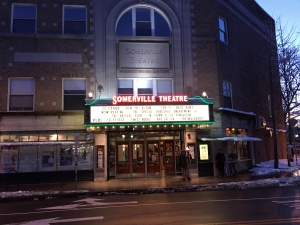 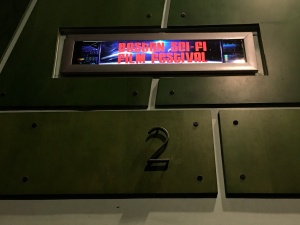 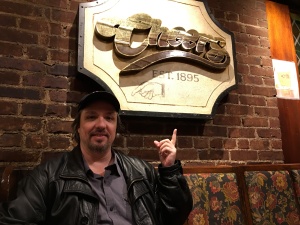 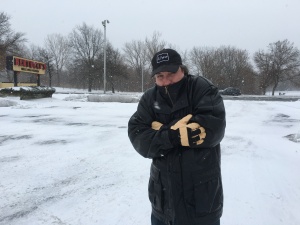 It’s been a wild ride, and we’ve only just begun! We are currently negotiating with major distributors as we now have multiple offers on the table for a North American and Worldwide release later this year, and will be scheduling more screenings in the weeks and months ahead. CLick here to join our mailing list and be the first to reserve your copy of the film, hear about screenings in your area, and more. Or you can book your own hometown screening! More info here.

Posted by Maderfilm on April 1, 2016
Posted in: Uncategorized. Leave a comment

Hi friends, so as we prepare for our Phoenix and Dallas festival premieres, and celebrate our award wins in our first two fests (Best Science Fiction Film and Best Supporting Actor for Bruce Davison in the Hollywood Reel Independent Film Festival, along with the Chrononaut Time Travel Award in the Boston Science Fiction Festival) here is a look back at our final days of filming and what brought us to this point. Enjoy!

Posted by Maderfilm on February 14, 2016
Posted in: Uncategorized. Leave a comment

DISPLACEMENT will have its West Coast Premiere at the Hollywood Reel Independent Film Festival on Friday, Feb. 19th, 9:30pm at the Regal Cinemas LA Live! Plus we won Best Science Fiction Film and Best Supporting Actor for Bruce Davison in this fest so it’ll be a fun night! Get your tickets here:  http://www.hollywoodreelindependentfilmfestival.com/2016/feb_19.php#Displacement

We also just returned from our East Coast Premiere in the Boston Science Fiction Festival, where we screened for a nearly sold-out crowd and had a great Q&A afterward in the “micro-cinema” down the hall, with director Kenneth Mader and producer Zander Villayne.

And we are now an official selection in the Phoenix Film Festival which runs April 7-14 so all of you AZ fans can come out to see the film!

More exciting news to report in the weeks and months ahead so stay tuned! Meanwhile make sure to get your tickets to our Hollywood Premiere before they sell out! http://www.hollywoodreelindependentfilmfestival.com/2016/feb_19.php#Displacement